CPAS Alumni: The Cheeky Neurons Take on The World

CPAS alumni Jo Adams started the Cheeky Neurons project as part of her Masters of Science Communication. Since graduating in 2017, Nix and Nellie the Cheeky Neurons have continued their mission to explore the brain and epilepsy in a way that is accessible for kids and families.

“I’ve been overwhelmed by the reception that The Cheeky Neurons and I have received. I’ve been contacted by epilepsy organisations and campaigners from around the world to voice their support for the project,” Jo said.

Nix & Nellie The Cheeky Neurons set out to explore the brain & epilepsy in a family-friendly way.

“I’m really proud to be able to help people affected by epilepsy and help spread awareness through The Cheeky Neurons.”

The concept had its beginnings in personal experience for Jo. A close friend’s daughter was diagnosed with epilepsy at 4 years of age.  Jo combined that experience with her background in neuroscience, her passion for craft and her love of talking science with children to create The Cheeky Neurons - a platform for spreading awareness and understanding of epilepsy.

Inspiration and crocheted neuron patterns were found in the hugely successful Neural Knitworks project that runs during National Science Week. In consultation with the Neural Knitworks founders, Jo used their crochet neuron pattern to create the cheeky characters who would go on to epilepsy-awareness stardom.

Nix and Nellie’s goal is to provide information about how epilepsy affects the brain in a family-friendly way through their website and on social media. The website features stop-motion animations starring Nix, Nellie and their friends, interviews with experts and people affected by cheeky neurons, and activities and contacts to help families better understand epilepsy.

“Participants get to create their own cheeky character while having open conversations about epilepsy and learning about how epilepsy affects the brain.” said Jo.

These newly created cheeky characters have their own mission – to help to fight stigma by sparking conversations about epilepsy in their new homes.

“Having everyday conversations about conditions like epilepsy is the first step to increasing understanding and reducing stigma.”

March 2018 was a busy time to be a Cheeky Neuron! Thanks to a grant from Inspiring the ACT, Nix and Nellie were spreading epilepsy awareness around Canberra with their friends from Epilepsy ACT and The Australian Brain Alliance.

They walked for epilepsy around Lake Burley Griffin, hosted Make Your Own workshops at morning teas at Epilepsy ACT headquarters and at the ACT Legislative Assembly, and ran workshops in public spaces around Canberra. 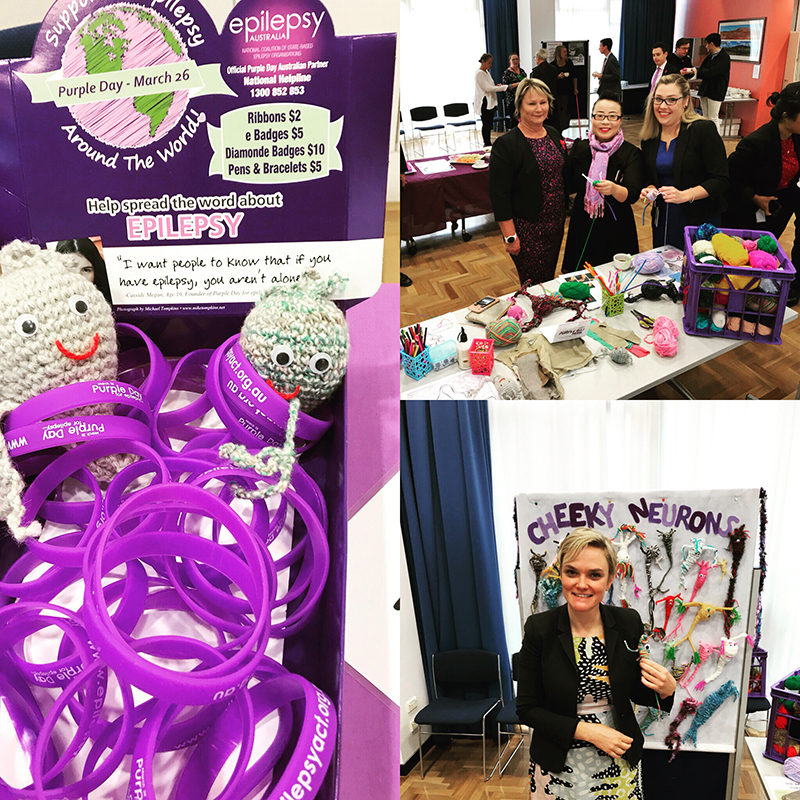 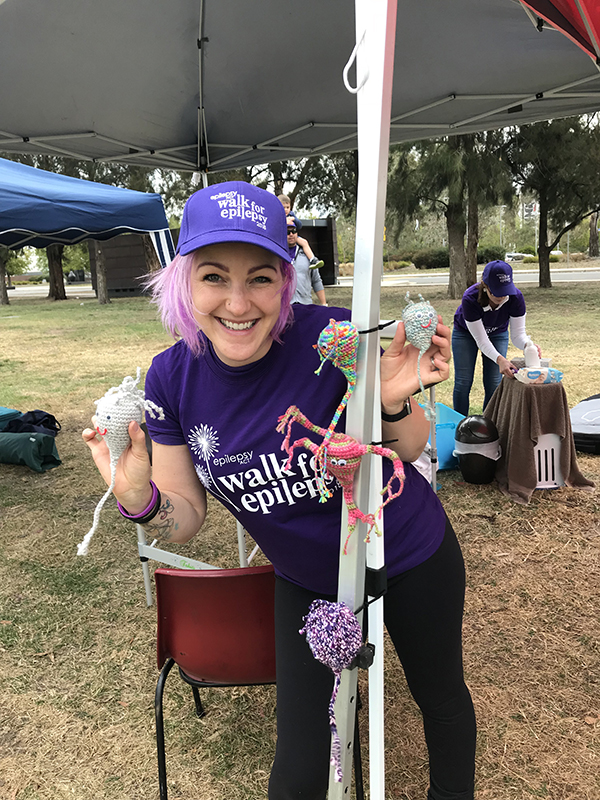 Jo, Nix & Nellie get ready to Walk for Epilepsy Awareness

The March highlight came on the 26th, which is Purple Day – a global initiative to spread epilepsy awareness. The Cheeky Neurons were invited to attend Brains On The Hill at Parliament House, an event organised by The Australian Brain Alliance to support Australian brain research. They spent the day spreading the cheeky amongst researchers, neurotech industry leaders & politicians, accompanied by Jo and fellow CPAS graduate Kendal Fairweather. 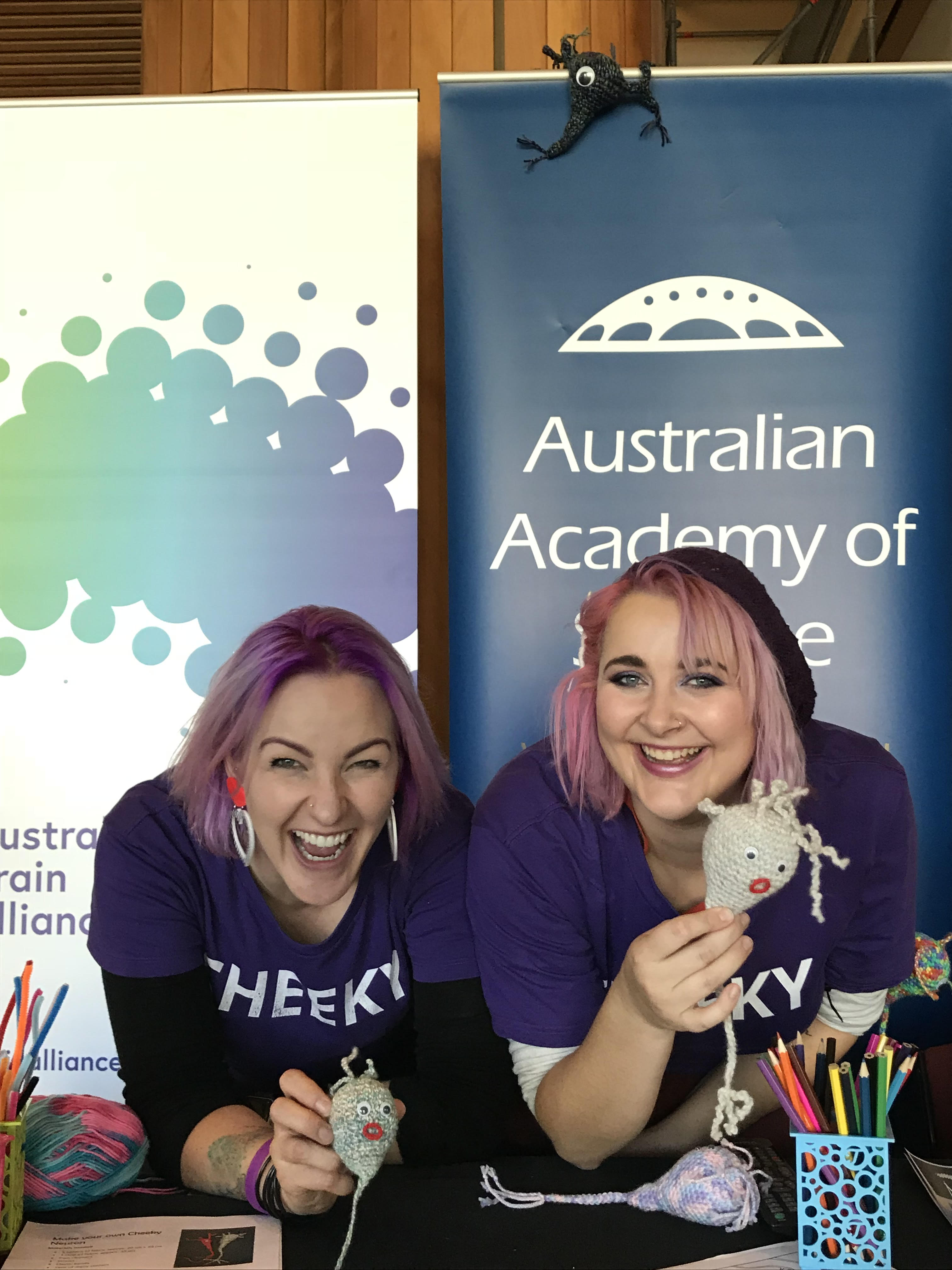 “Chatting to politicians and leading neuroscientists about the Cheeky Neurons’ mission and sending them home with their own cheeky characters was a real buzz!”

In the future Jo intends to continue running workshops and spreading epilepsy awareness with Nix and Nellie. She also wants to take The Cheeky Neurons further, exploring other neurological disorders in the same child and family-friendly way.

“The fact is, kids are affected by neurological disorders - either with a diagnosis, supporting someone at home, or witnessing symptoms like seizures. Kids also have an astonishing willingness and capacity to understand information when it is pitched at their level. Spreading understanding is how we combat the stigma and fear that surrounds conditions like epilepsy.”

Can hype be a force for good? »