In an unprecedented step, prestigious science publication Scientific American has launched a scathing attack on President Donald Trump and endorsed his opponent, Democratic candidate Joe Biden, in the upcoming US election. It’s the first presidential endorsement in the magazine’s 175-year history.

To this, we say: about bloody time! As we’ve noted before:

Science is political. The science we do is inherently shaped by the funding landscape of government and the problems and issues of society. This means that to have any influence on how science is organised and funded in Australia (or the US or any other country), we as scientists and science communicators must act in ways that matter in the arena of politics.

It’s now more critical than ever, as the editors at Scientific American clearly lay out, that the people who are actually knowledgeable about the world’s crises speak out and represent that knowledge (or “collective wisdom”) in public, out loud and with their names attached.

Under Trump, science isn’t just ignored. It is lampooned and directly attacked, especially on issues such as climate change and the coronavirus pandemic. This actively threatens the lives (and livelihoods) of not just millions of Americans, but countless others around the world.

Throughout the coronavirus pandemic, Trump has shown blatant disregard for scientific recommendations and has actively peddled misinformation, such as when he suggested UV light could be used to treat patients.

In the past, it has been suggested scientists who comment beyond their specific, narrow sphere of reach by delving into politics are tainting their credibility – perhaps even behaving unethically.

But as we now stare down the barrel of an ongoing global pandemic (and relentless climate change continuing in the background), to remain quiet on the politics is not just unethical, but actively dangerous.

The argument that science is somehow tainted by offering policy or political opinions is an idea whose time has long gone.

Who is better placed to add valuable weight to public debates about the key problems we’re facing, than those who represent the voice of evidence, reason and debate (such as Scientific American)?

As one of us has previously argued, in Australia we should encourage scientists and science communicators to:

Become more active in challenging the status quo, or to help support those who wish to by engendering a professional environment that encourages risk-taking and speaking out in public about critical social issues.

It’s the principle, not the votes

Scientific American is not entirely alone in pushing for the involvement of scientists in public policy and action. Other reputable publications have taken similar stances in the past.

In 2017, Nature argued “debates over climate change and genome editing present the need for researchers to venture beyond their comfort zones to engage with citizens”. Earlier in 2012, Nature explicitly endorsed Democratic presidential candidate Barack Obama over Republican challenger Mitt Romney.

In Australia, our news publications have a tradition of endorsing political parties at federal elections, but our science publishing landscape has typically remained agnostic.

Peak bodies such as the Australian Academy of Science, and Science and Technology Australia, have commented on the political decision-making process, but have rarely been so forthright as the Scientific American’s recent editorial.

Not only should scientists take a stand, they should also be encouraged and professionally acknowledged for it.

Scientists as citizens have the right to advocate for political positions and figures that support the best possible evidence. In fact, when it comes to matters as serious as COVID-19 and climate change, we believe they have an obligation to.

Scientific American’s intervention may not impact votes, but that’s not the point. The point is it’s crucial for people who believe in knowledge and expertise to stand up and call out misinformation for what it is. To do less is to accept the current state. 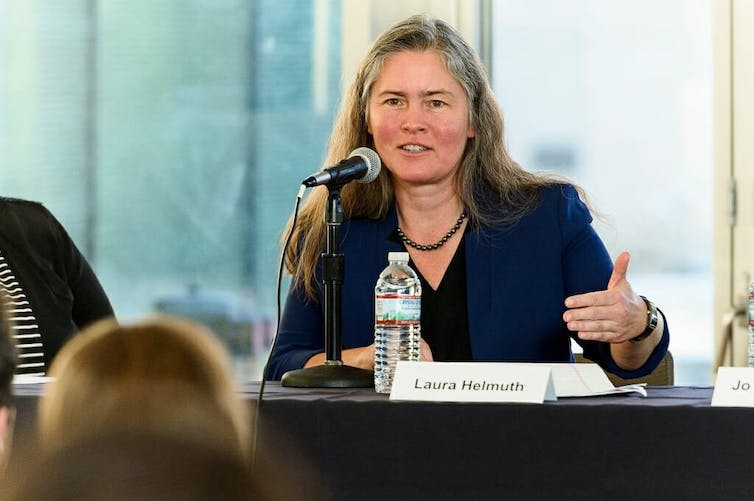 Laura Helmuth is the ninth and current Editor in Chief of the Scientific American magazine. She was appointed to the role in April this year. @webmz_/Twitter

Nonetheless, many scientists in Australia rely on government funding. This can make it difficult to speak up when legitimate evidence clashes with the orientation of the government of the day. Confronted with the possible loss of funding, what can a scientist do?

There’s no perfect solution. Many may feel the risks of speaking are too great. For many, they will be.

In such cases, scientists could perhaps look for intermediaries to make their case on their behalf – whether these are trustworthy journalists, or publicly visible academics like us.

In the long term, defending those who have gone out of their way to act responsibly will help. The more this becomes normal, the more likely it will become the norm. But it’s also an unfortunate reality that change rarely occurs without discomfort.

Speaking out can’t always be someone else’s job.